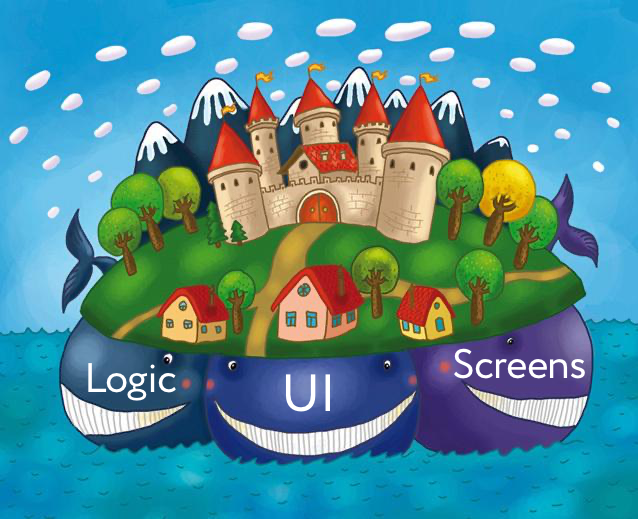 Before we move on to the stages of "Model Development", let's look at the traditional method of application development - "Feature Development" is a method in which a task is set with a description of the functionality and with a link to Zepllin and, at best, links to prototype screens in the Marvel App. When a programmer receives a task to develop a feature, he divides it into three parts: 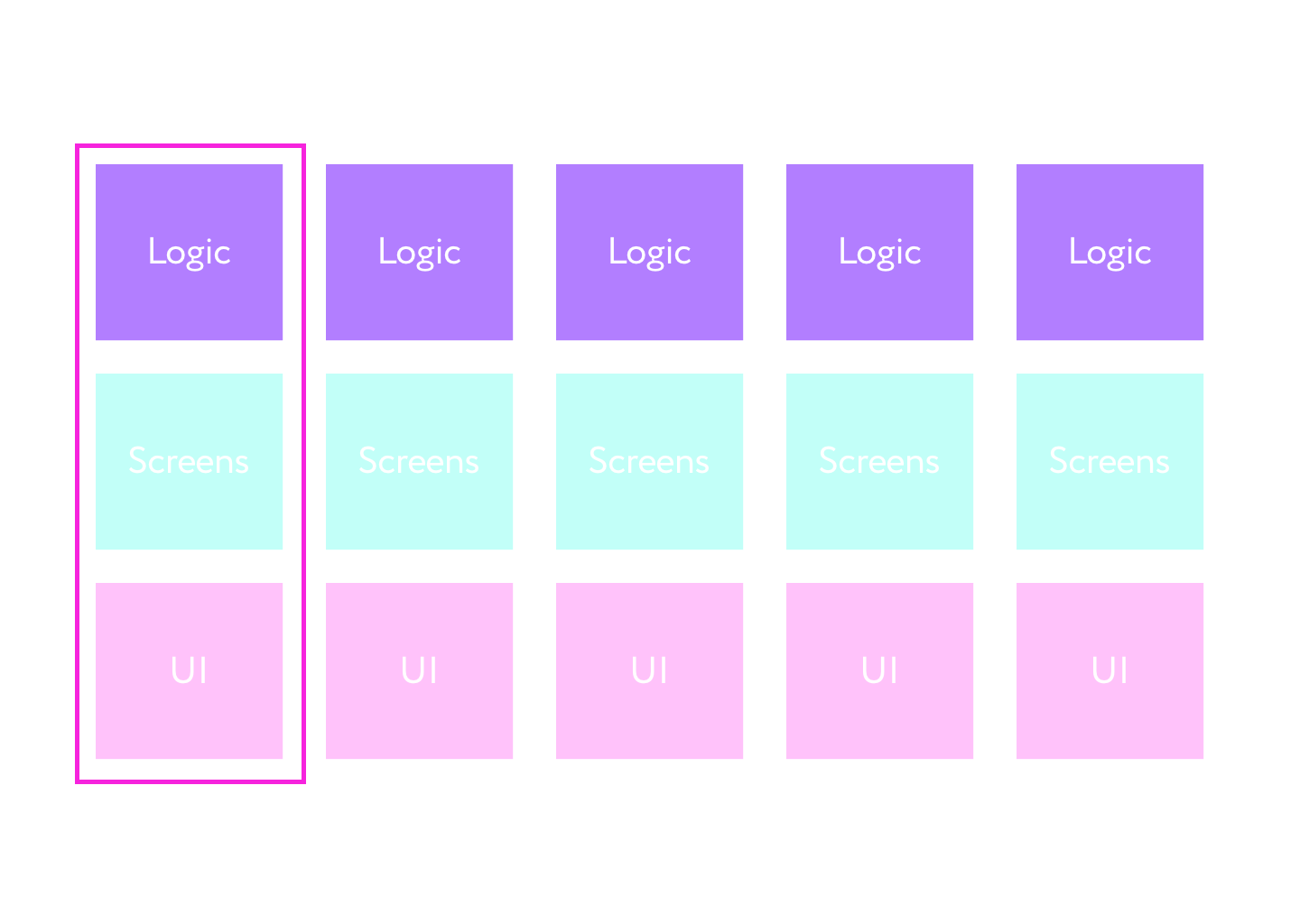 As a result, from the desired, we see a picture where UI components are laid out right on the screens and the layout layer merges with navigation and logic on one screen, which in turn goes beyond the boundaries of the Atomic design methodology and its slogan “Create systems, not pages. " 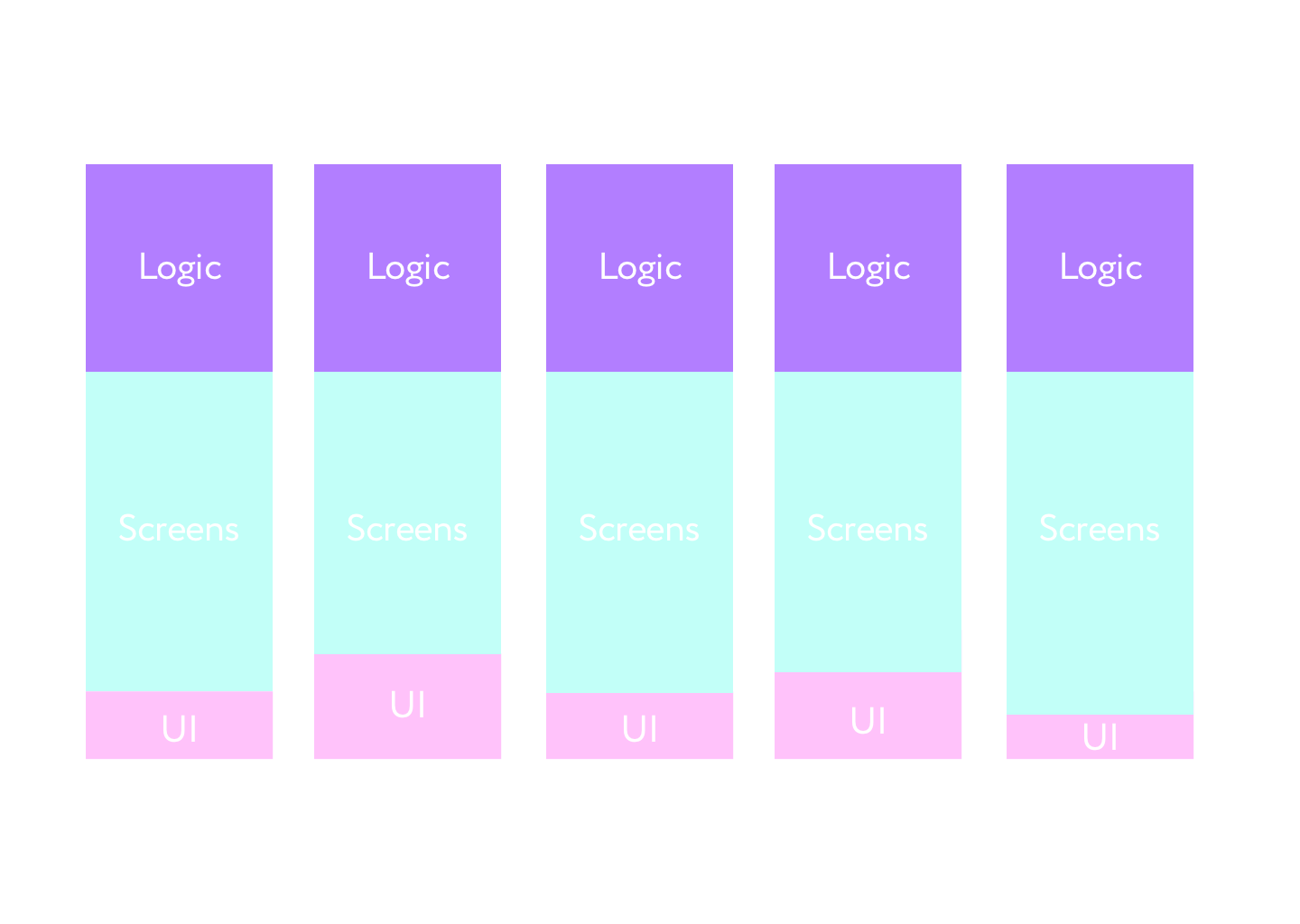 Insufficient elaboration of requirements at the first stage can lead to the fact that the implemented functionality will not work at all as expected by the analyst, but only as the developer understood it. That, unfortunately, in the modern world happens quite often and leads to the return of the task to the developer.

In order to eliminate this problem, I use an alternative development method, also known as the Model Development method. Its main difference from the "Feature Development" method is that initially we set the task in the form of a typed model schema TypeScript and GraphQL, which allows the developer to use code typing not by the residual principle, as is usually the case, but fundamentally at the level of creating a technical specification. And so we initially put a typed model of the database implementation into the task, which allows us to control the accuracy of the task throughout the entire life cycle of the task from the backlog to done. 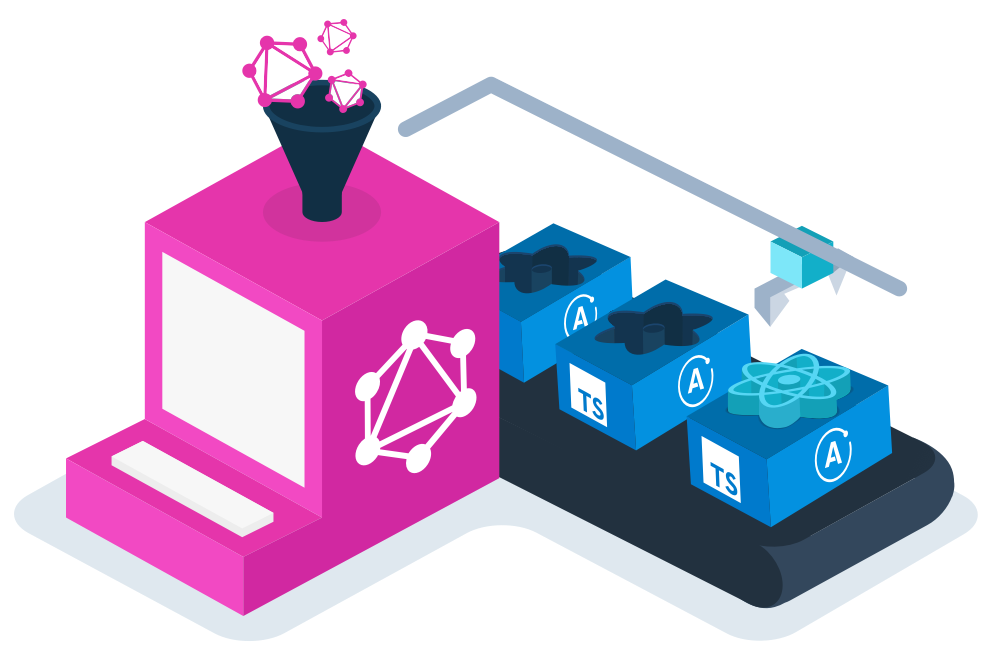 And also by isolating the component layer from screens and business logic by the Storybook framework , an open source tool for building UI components and pages in isolation. It simplifies user interface development, testing, and documentation. 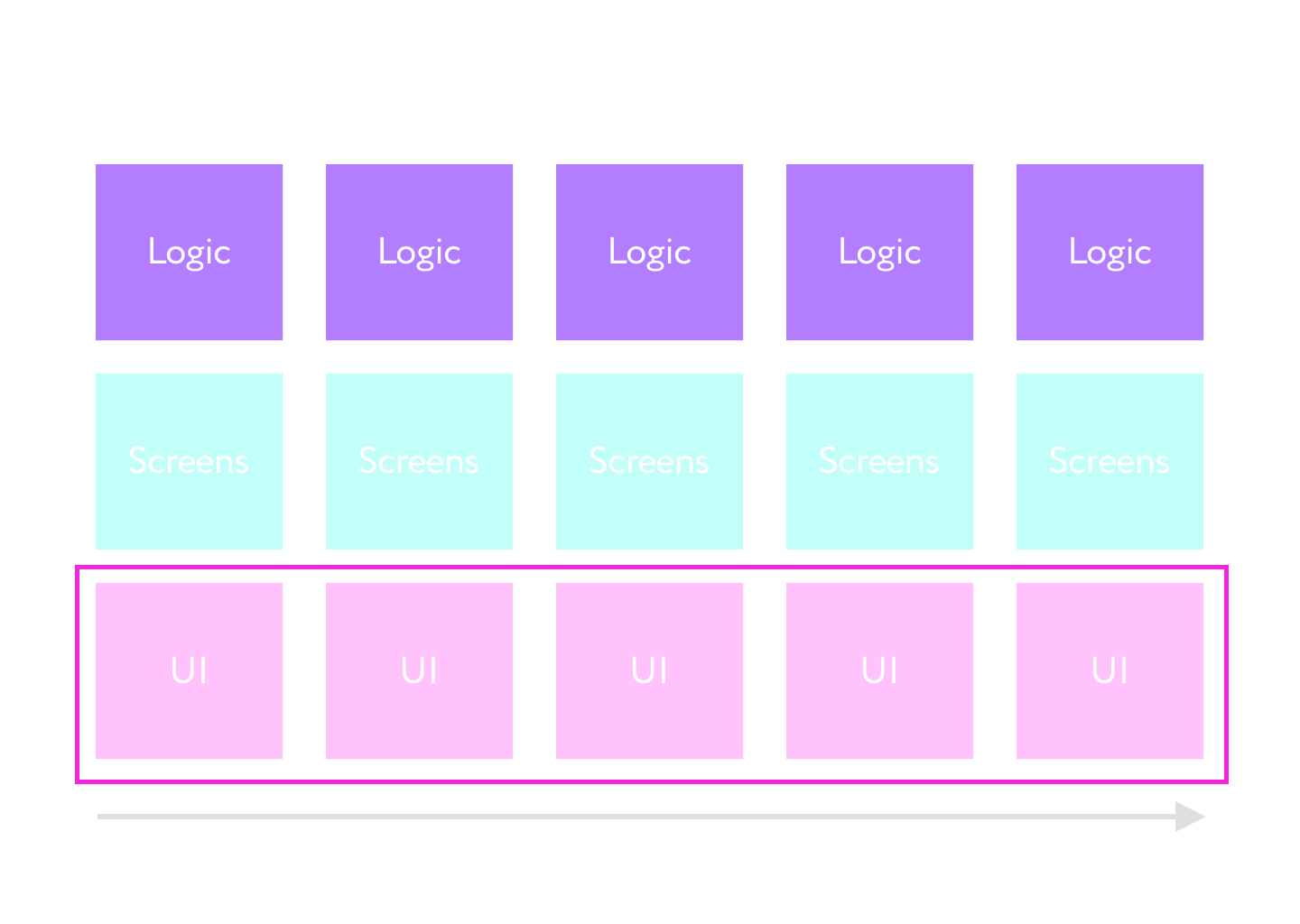 As a result, we divide the entire development into three stages and distribute it among three developers of the same tier: 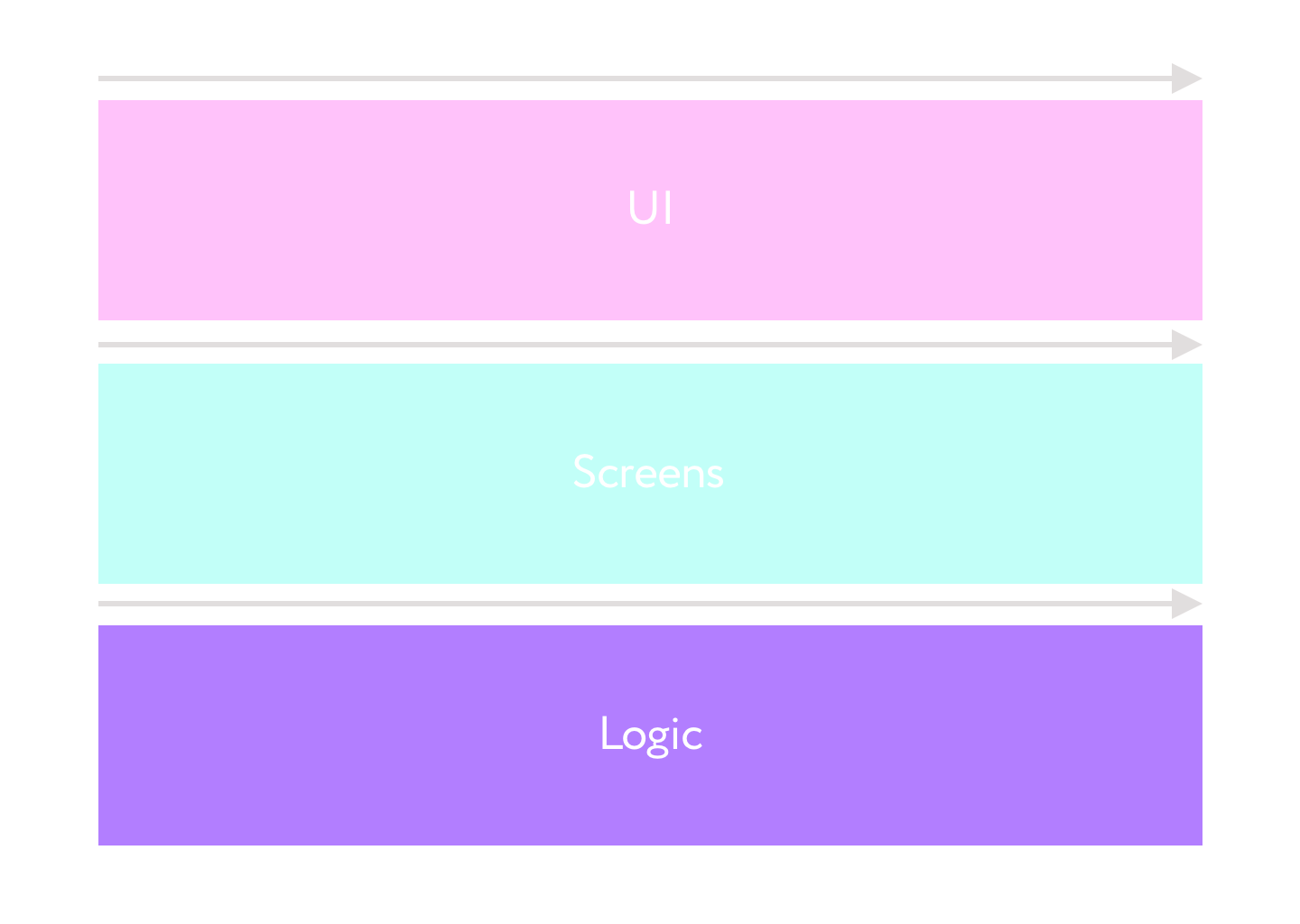 The best way to explain something is to show an example myself, so I'll show you how I design stories for my mobile application Leela's Game using the Model Development method. 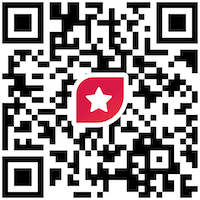 Now we will create a history for the decomposition of the ProfileScreen. 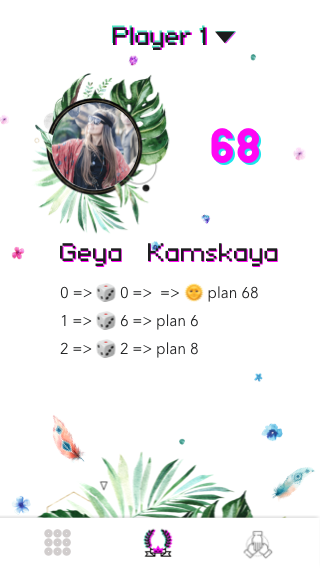 With this method, application development can be many times faster and it is called "Model Development", because any story is decomposed into three tasks, where one task implements the TypeScript model, the second GraphQL model, and in the third deploy it to the server: 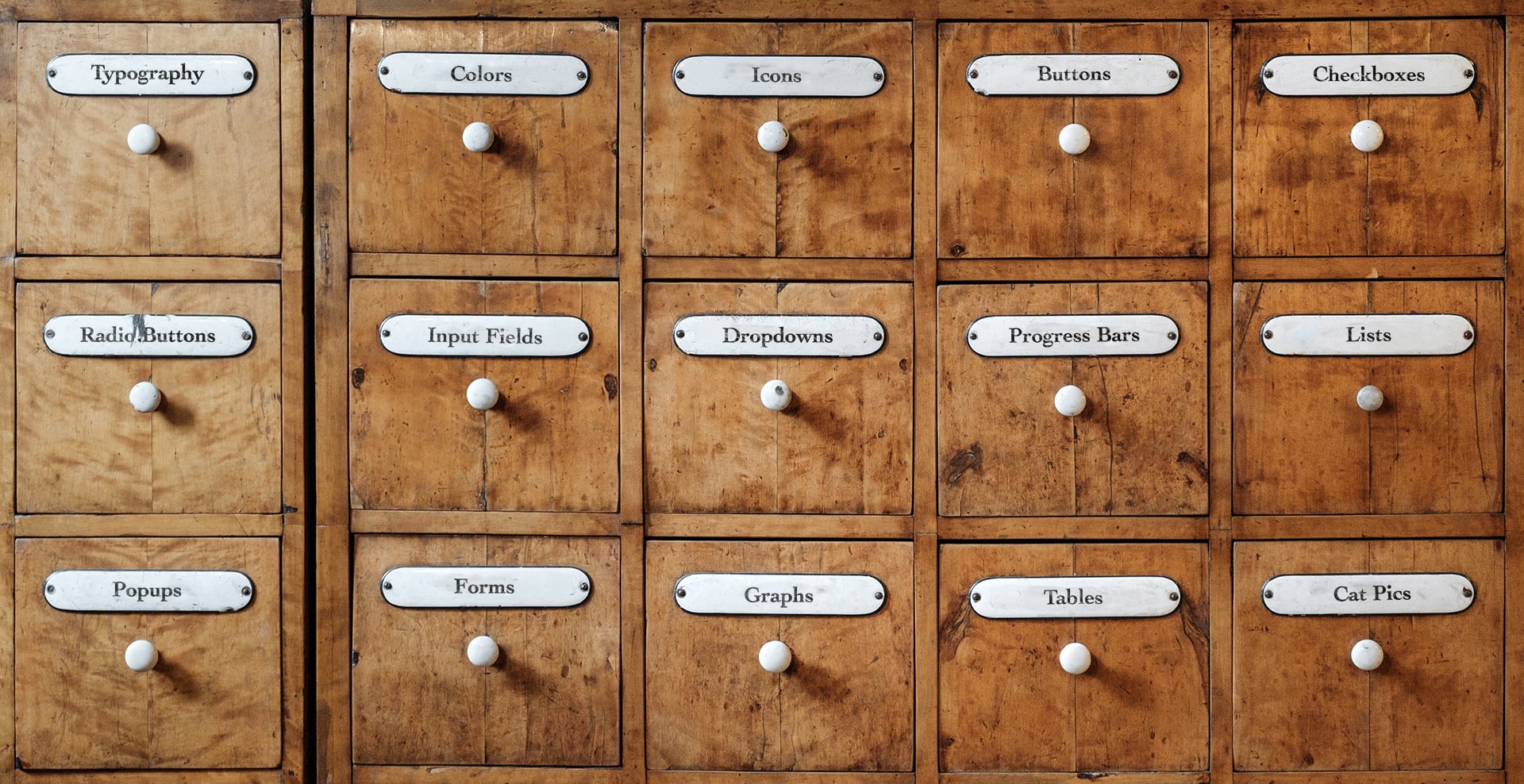 UI Components is a source-coded UI toolkit that isolates communication with screens and navigation, as well as a layer of logic, within a cross-platform UI component framework.

Building a React Native mobile app begins by creating the UI Components in the Storybook from which the app will be built. These are our building blocks, atoms, molecules, organisms, which make up the entire visual part of the application (screens).

Storybook - This development of robust user interfaces provides a sandbox for building user interfaces in isolation so you can develop hard-to-reach states and edge cases.

Due to the fact that we make the application according to the Storybook rules, our components are easily portable to React Native for Web. Because of this, we get a UI-kit not only for mobile development, but we can also use it on the site, getting the development process twice as fast in layout, since we do not need to layout components for the site separately from the mobile platform.

"Storybook is a powerful front-end tool that allows teams to design, build and organize UI components (and even full screens!) Without getting distracted from business logic and plumbing."

Nowadays, whoever you ask about Atomic design, then everyone is ready to follow its slogan “Create systems, not pages”, but unfortunately, in practice, developers continue to create pages to which they attach business logic.

The main benefits of creating UI Components in Storybook:​

Since we are typing components from the beginning, this is how we lay the foundation for creating a database model for local storage and on the backend side.

As well as separating the layout from the screens, this is a priority border in the first step of application development. This step sets up component development at the application design level. The programmer does not even need to come up with the names of the components, since they are written on artboards in the Sketch App or Figma program. On average, 3-6 components can be drawn up per day. Thanks to this, we can calculate the developer's man-hours to create a UI kit, and then the entire application. 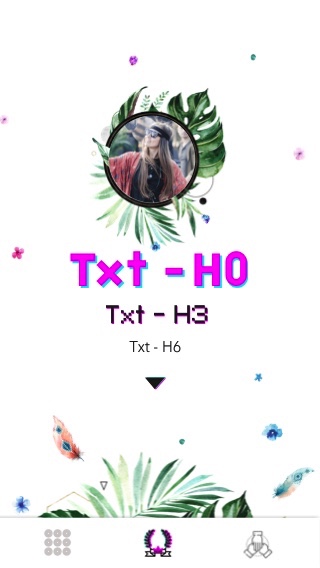 When developing with React Native, you need to manually configure your app to look great on different screen sizes. This is a tedious job, so react-native-size-matters provides some simple tools that make scaling a lot easier. The idea is to design once on a standard mobile device with ~ 5 "screen and then just apply the utilities provided, so the artboard size in Sketch for the design is 320x568px.

Let's move on to the creation of technical specifications for the development of UI Components in the Storybook.

For this screen, we will implement two TypeScript models:

Compilation on Screens - The screen model is the sum of the screen models of the components on the screen. Screens are created, they are also artboards in Sketch, where we combine components and position them relative to each other. At this stage, navigation is connected. As a result, we have a ready-made prototype that can be agreed with the client. Thanks to the fact that the components are typed by TypeScript, we can lay down the component models on the screen and set the task to deploy the backend using the AWS Amplify framework . Initially, GraphQL was designed to make frontend work easier and at the same time became the serverless language of AWS architects, where typed models became the building blocks.

Even if your plans do not have the opportunity or interest to use the AWS Amplify framework in the project, then the first two steps of this method are applicable to your project, even without typing models.

The speed is 5-10 minutes, since the scheme is immediately deployed from step two and at the same time there is no need to write code to create requests to the server, since code generation works. The whole deployment is the GraphQL model from step 2 sent with a single amplify push command.

Read more and how to deploy the scheme here

Sometimes you find yourself in a precarious situation, but you'd better wait longer than clearly fail the operation. Apollo has apollo-link-retry which provides exponential rollback and requests to the server between retries by default. True, it (currently) does not handle retrying for [GraphQL] (https://graphql.org) errors in the response, only for network errors. Redux, MobX, of course, does not have this solution under the hood, since they are not clients and you have to use third-party middleware, due to the fact that REST is like a retired grandfather with the support of beloved grandchildren.

Detailed parsing of GraphQL vs REST. 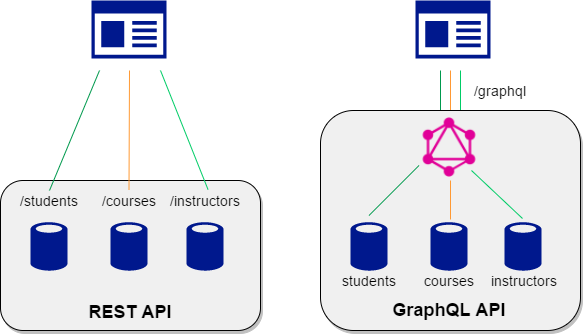 AWS Amplify has a DataStore function , which is not only analogous to apollo-link-retry, but also has a built-in custom programming model with automatic version control, conflict detection and resolution in the cloud. In addition, you no longer need to write additional code to send a request to the server after the application goes online, since it comes out of the box in the form of code generation. The folder with models models and the folder graphql are generated automatically - this is the client layer for all possible CRUDs - Create Read Delete.

True in AWS Amplify Create and Update are one method DataStore.save.

Creating a backend on AWS Amplify is working with serverless technology, so before proceeding, we'll figure out what is serverless computing and what are their advantages over server-side computing.

A prediction by the University of Berkeley pundits on how backend technology will evolve:

By providing a simplified programming environment, Serverless Computing makes the cloud much easier to use, thereby attracting more people who can and will use it. Serverless computing includes FaaS and BaaS offerings and marks an important milestone in the evolution of cloud programming. This eliminates the need for manual resource management and optimization that today's server-side computing imposes on application developers, which is like the transition from assembly language to high-level languages ​​over four decades ago.

We forecast server-free usage to skyrocket. We also predict that on-premises hybrid cloud applications will shrink over time, although some deployments may persist due to regulatory and data governance constraints.

Cloud-native architecture that allows you to outsource most of your operational responsibility to AWS for more flexibility and innovation. Serverless computing allows you to build and run applications and services without worrying about servers. They eliminate the need to deal with infrastructure management issues such as provisioning servers or clusters, resource requirements, and operating system patching and maintenance. They can be used for virtually any type of back-end application or service, and everything that is required to run and scale a highly available application is done without client intervention.

In our definition, for a service to be considered serverless, it must scale automatically without the need for explicit provisioning and be billed based on usage.

To put it very simply, Serverless means not the physical absence of servers, but the absence of the headache of infrastructure management, maintenance and creation.

Read more about the benefits of serverless architecture here.

Stages of the birth of new functionality in a software product